It can take a tragedy to remind me of how truly vital our work is at PathPoint. On April 7th, a report was issued by the Berkeley, California Center for Investigative Reporting (CIR) as a follow up to their 2012 exposé on uninvestigated/unpunished crimes against residents of California’s state hospitals for people with developmental disabilities. In their earlier report, CIR data was based on family complaints and judicial records. Requests for data from the Department of Developmental Services and the Department of Health Services under the Freedom of Information Act resulted in documentation that was so highly redacted as to be rendered meaningless. CIR filed suit and, ultimately, the California Supreme Court compelled the state to furnish the data requested. This week’s report was the result of that data analysis. To give you a hint of the content, the title of the April 7th release is: 13 Deaths Blamed on Abuse and Neglect at California State-Run Homes.

To read the report in its entirety click here. But, warning, it’s very disturbing.

The content is horrific to say the least. What I find absolutely appalling is that the Brown administration is content to continue funding these state hospitals (called Developmental Centers, or DCs, in California) in spite of the growing evidence that these facilities are incapable of protecting the 1,010 people now living within them. The federal government, itself, has had sufficient quality concerns to discontinue federal participation in the funding of ALL eleven ICF units at Sonoma DC effective May 7, 2015. That’s big. But it may not be the end of the story. There are also de-certifications proceedings still under appeal against units at Fairview as well as Porterville Developmental Centers. The federal findings and this report strongly document that the state cannot meet basic health and safety quality standards!

At PathPoint and similar organizations, the men and women we support, many of them former residents of the developmental centers, are served in their home communities receiving residential services, supported-living services, day-program services, employment training, and related services at less than five percent of the cost of the developmental centers. The numbers tell a sobering story: the state of California is proposing to spend spent over $515 million to support 1,010 individuals housed in DCs. This equates to $510,112 per resident, a 63% increase in costs in just three years. Conversely, 180,000 individuals served at community organizations such as PathPoint cost $25,151 per person in support. 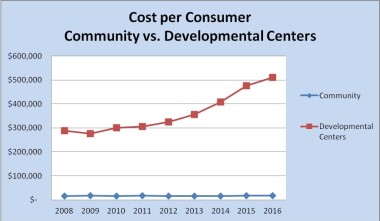 So far, the Brown administration’s response has been to backfill the loss of federal funds with state general funds. If they do so, the price tag to state taxpayers could reach as much as $100 million next year alone. Meanwhile, community services, like PathPoint, are forced to continually cut back in order to live within reimbursement rates that are now 15 years old. These are community services that, throughout California, serve the same complex needs we see in people who are living in the DCs.

Governor, it is time to close the Developmental Centers and adequately fund community services! This is mismanagement of public dollars, pure and simple. We demand that our legislators support sufficient funding for the most moral, ethical, and cost-effective alternative for our sons, daughters and neighbors with severe disabilities. Close down the DCs and allow these remaining residents to return to their home communities to live dignified and valued lives through the assistance of community-based services such as PathPoint. The opportunity to have dignity, well-being and social integration is the desire of every human being. These individuals deserve nothing less.